We always love a good story about a Canadian player hitting a big jackpot. This time lady luck decided to smile at Jerry K., an online casino player from British Columbia. The win came from the “Let ‘Em Ride” table game at the Bodog online casino and the total amount paid out was $397,879. Not bad from a single hand!

The huge win amount was the result of two events within the game. The first was Jerry being lucky enough to complete a royal flush – the game’s biggest paying hand. It started with an Ace, King and a Queen, all clubs. The community cards did the rest. Jerry’s jaw must have dropped when he saw a 10 and a Jack come up, both clubs! 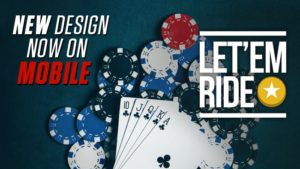 With a royal flush, Jerry was already on his way to landing a big payout, but that’s not where this story ends. Jerry had also made a side bet. Nothing crazy, just $1 on the progressive side bet offered by the game, but that amount is enough to play for the entire jackpot. Well, it was enough. That side bet combined with the royal flush culminated in a huge payout.

It’s a pretty crazy story, but no less than any of the other big slot wins. Maybe table games aren’t really considered as games that will pay out lump sums but a lot of the major card games offer jackpots beyond the regular game winnings.

Bodog’s Let ‘Em Ride is an action-packed poker game that brings the action of poker into a casino setting. You could think of it as a simplified version of poker, or a more advanced version of video poker. In Let ‘Em Ride, you don’t play against opponents. Instead, you try your luck with the deck and hope to land a nice hand. It’s a pretty cool card game that’s definitely worth a try, and it’s available for mobile devices, which is always a big plus.

How to Play Let ‘Em Ride

Let ‘Em Ride is a game that can be learned in a few minutes. One of the big advantages, as opposed to regular online poker, is that you have complete control of the pace of the game. By weighing up the strength of your hand of three cards, you decide whether to check or raise. Your total hand is comprised of your 3 cards and the 2 community cards on the table. To win a payout, you need to end up with a pair of 10’s or better. If you end up with one of the stronger hands, you get to play for the progressive jackpot, but that’s only if you decided to opt in before play with a $1 side bet. This side bet is what Jerry decided upon and his royal flush is what led him to taking the entire jackpot. A straight flush wins 10% of the total jackpot amount.

Bodog has announced that the Let ‘Em Ride jackpot is already ready to be won again, starting at $100,000. Now that this win has made people really take notice of Let ‘Em Ride, it’s likely that this progressive jackpot will start rising pretty quickly.

Bodog has been a favorite online casino amongst Canadians since it was first opened. That’s no surprise since it was founded by well-known Canadian gambling entrepreneur Calvin Ayre. It’s a great place to enjoy online casino games and if you’re a sports fan, then Bodog is a must. Its sports betting platform is second-to-none combining a huge range of sports from leagues from around the world with really competitive odds and an impressive interface.

Until our next news update, have fun at the casino!