An Emoji Slot Game? NetEnt Continues to Surprise Us

The ICE Totally Gaming conference in London, England, proved to be a hotbed of new ideas and announcements in the world of online casino games. With big mergers going down like that of Playtech and Warner Bros. and other innovations being shown off, the conference set the tone for what’s looking like an especially exciting year in gaming. One of the quirkier announcements was that of a new emoji slot game developed by none other than the popular software developer NetEnt. If you haven’t heard, an emoji movie aptly named “Emojiplanet” is set to hit screens this year and this was probably the spark that ignited the idea to create a slot game based around what has become an integral way of expressing ourselves in the digital age.

The use of emojis is both loved and criticized for being harmful to how we as humans communicate. Regardless of how you feel about these bodiless characters, it’s clear that they’ve made a huge impact on us and it doesn’t look like they’ll be going anywhere soon. That doesn’t mean that creating an entire feature film based on the things is a great idea but hey, that’s the entertainment industry for you. What’s even more surprising is the movie’s cast which includes Sir Patrick Stewart, known for his legendary role as Captain Jean-Luc Picard of Star Trek fame. Stewart will have to really apply his talent to this role as he’s been cast as none other than the happy poo emoji in all its glory and complexity.

Simon Hammon, the Chief Product Officer at NetEnt stated that, “As a leader in both mobile online gaming and innovation, emojis are a perfect fit with NetEnt. Every day, millions – if not billions – of people around the world enjoy using emojis. They have become a language in their own right; it’s hard to think of a more collectively familiar and loved brand to partner up with.” 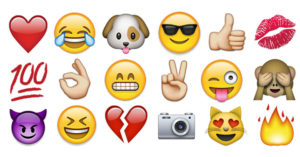 NetEnt will release “Emojiplanet” in August alongside the emoji movie release.

NetEnt’s emoji slot game will be available to players alongside the movie release which is scheduled for August of this year. The party responsible for setting up this unusual collaboration is Global Merchandising Services whose licensing manager, Jens Drinkwater, said, “”We are tremendously excited to bring the colourful and exciting world of the emoji company to the gaming community. We are sure that the Emojiplanet game will be a fantastic success for players of all ages.”

It’s a pretty out-there idea, but not a bad one when you think about it. After all, what slots fan wouldn’t like to spin the reels of an emoji slot game at least once just to see what it’s like. Because NetEnt is behind this one, you can be sure that it will be a lot of fun, with lots of great animation and surprising gameplay.

While Emojiplanet is in a league of its own with regards to unusual themes, NetEnt has a few more tricks up its sleeve this Spring. If you’re familiar with the slots series Fairytale Legends, then you’ll be happy to know that a new game will be added entitled Hansel and Gretel, based upon the well-known tale. Other promising slots games scheduled for release in the coming months are Copy Cats and Butterfly Staxx, which looks like it will be a variation on the extremely popular Neon Staxx game.

If you’re a fan of online slots and haven’t experienced the funky and exciting world of NetEnt games, then you should get on that right away. We recommend 888 Casino as a great place to play NetEnt games as it has an amazing casino platform and is very suited to Canadian players.