As casino players, we have it pretty good here in Canada. This latest news highlights this fact. The extremely popular Cash Busters game is set to be released as a physical game accessible to Canadian casino visitors. Loto-Quebec and Instant Win Gaming Limited (the creators of Cash Busters) have chosen to collaborate on the project following previous successes with dual launches.

Instant Win Gaming Limited is a London-based company that specialises in instant-win games, supplying its impressive portfolio of over 250 titles to lottery operators all over the world. Beyond lotteries, IWG also supplies games to well-known gaming groups such as 888 Holdings, GVC and Rank. The company is not new to innovation, but this will be its first step into the physical world of gaming.

In an official statement to the press, Rhydian Fisher, Chief Executive Officer of Instant Win Gaming Limited, described the move as a “truly ground-breaking moment for the instant-win sector.”

Fisher highlighted the fact that online games were usually inspired by physical games, stating, “Loto-Quebec has used dual launches online and in retail very effectively with us before but never before has a digital game been turned into a physical ticket; it has always been the other way around in the past. It just goes to show how successful Cash Buster has been online for Loto-Quebec that it has decided to create a physical game for its retail customers. This is a massive step for Instant Win Gaming Limited and an industry first for Loto-Quebec. We are planning to roll out further physical editions of our games to more of our partners in the coming months.”

Clement Aubin, Online Product Team Manager for Loto-Quebec, commented on how Cash Buster’s extreme popularity had motivated the decision, saying, “Cash Buster has proven to be hugely popular with our online customers and it made perfect sense for us to offer the same game to our retail players. We have a great working relationship with Instant Win Gaming Limited and it has been extremely helpful in delivering this unique product for our customers. I’m sure it will be as big a hit for the retail sector as it has been online.”

As far as Instant Win Gaming Limited is concerned, this is only the beginning. The company has already announced that there are plans in the works to release additional digital hits as physical versions in the near future. Games in the pipeline include Super Gem Blaster, Mayan Bonus, and Cash Buster Towers. 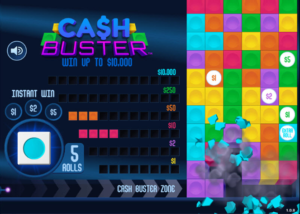 What makes Cash Busters so special?

Cash Busters is an instant-win online gambling game. The core of the game is based upon dice throws and a system of blocks that resembles puzzle games like Bejeweled. It’s an extremely fun game, that’s very different to slots but is just as high in entertainment value. There is a list of prizes on the left side of the screen that are all up for grabs so you know what you’re playing for. The prizes are organized by color. On the right side of the screen there’s a wall of blocks that kind of looks like a Tetris-style game. Then, when you click the dice, the color that you get determines which blocks are destroyed. The number of blocks you destroy every round push you towards reaching one of the prizes. The game really builds the suspense since you only get 8 dice throws to hit your target.

This move by IWG and Loto-Quebec is definitely a smart one. In fact, it might even result in players who’ve never tried the game, liking the physical version so much that they then go home to seek out the online version. Wait a second, maybe that’s the whole idea.