The Alberta Gaming and Liquor Commission has approved a plan for a new gambling entertainment centre to be built in the Edmonton area. The new Edmonton casino will host a number of facilities including a casino and a race track. The operator initiating this development is Century Casino Incorporated, a leading gambling company based in Colorado that already runs a number of large casino facilities mostly in Canada and Poland.

Century Casino Incorporated recently purchased Century Casino St. Albert and runs four gambling venues in the province of Alberta in total. In September, Horse Racing Alberta selected the operator to develop and operate a new horse racing facility that will be situated just south of the city of Edmonton.

In Colorado, Century Casino Incorporated operates two casinos in the towns of Central City and Cripple Creek, but this new gambling centre will be built from the ground up and the addition of a race track makes it a little different to the regular mid-sized casinos. The primary focus of the new facility, named Century Mile Racing Entertainment Centre, will be the race track itself which will feature a mile-long track, indoor and outdoor spectating areas, an off-track betting zone, restaurants, and bars. Besides the horse racing, which seems to be one of the company’s main points of expertise, Century Mile will also have a slots casino with around 550 machines. Just based upon these details it seems that this new casino entertainment centre will quickly become a major attraction amongst betting fans of all types. 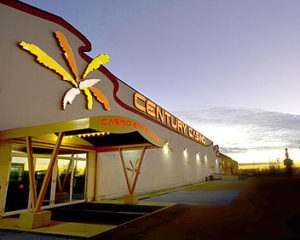 The Century Casino in Calgary.

Peter Hoetzinger and Erwin Haitzmann, the Co-Chief Executive Officers for Century Casino Incorporated, stated that they were “thrilled about this opportunity and believe the Century Mile has the potential to be even more successful than Century Downs, the racetrack and racing entertainment centre we opened two years ago in north Calgary.”

The co-CEOs added that they were thankful to the “Alberta Gaming And Liquor Commission as well as Horse Racing Alberta for their trust and approval and will work diligently with them and other authorities to begin and complete construction as soon as reasonably possible.”

Beyond North America, Century Casino Incorporated on 66% of a chain of eight casinos In Poland, branded “Casinos Poland”. The company was founded in 1992 and is listed on the NASDAQ Capital Market as CNTY. Since then Century Casinos Inc. has established itself as one of the leading players in the mid-size land-based casino market.

The Century Mile Racing Entertainment Centre will be built off the Queen Elizabeth II highway, not far from the Edmonton International Airport, near the city of Leduc. This highway is the main channel connecting Edmonton and Calgary and is actually one of the highways with the heaviest usage in Western Canada. The location is near a number of retail markets, a regional shopping centre and the RedTail Landing Golf Club, not to mention a several hotels.

A statement from Century Casinos Incorporated read, “The location has the potential to capture the south Edmonton and Leduc County markets,”. “The company estimates that the project will cost approximately $37.5 million based on the current exchange rate and construction will take approximately 15 months to complete. Commencement of construction of the Century Mile project is subject to the receipt of development and other permits.”

Century is currently working on obtaining finance for the construction of the project and will most likely rely on a combination of joint venture and equity financing to fund the project. The exact date has yet to be decided but because the approval of the project has already gone through, this should only be a formality at this point.