As virtual reality continues to gain popularity in the gaming world, it’s becoming clear that online casinos will be next to benefit from this new technology. Software company NetEnt, well-known for creating blockbuster slots games, are pushing this exploration forward with the world’s first online VR slot game. The game is called Gonzo’s Quest VR and it’s based upon one of NetEnt’s most popular slot games. Gonzo’s Quest VR will be available in all NetEnt casinos.

We’ve mentioned VR’s promising position before. It just looks like a natural fit for taking online casino games to the next level. Now that NetEnt is launching an actual product, this direction will most likely be explored by competing companies with even more urgency. This means we should expect to see more VR in online casino games, probably even before the year is up.

NetEnt’s Gonzo Quest VR was showcased at the ICE Totally Gaming conference in London at the beginning of February and was well received by the industry professionals in attendance. Upon announcing the launch of the first VR online slot, Per Eriksson, NetEnt’s CEO said,”We firmly believe that VR has a given place in the future of online gaming, based on our research and the trends that we monitor. We remain focused on delivering the ultimate entertainment experience by taking this first step towards developing our first real-money VR slot. This is a milestone for NetEnt and the gaming industry.” 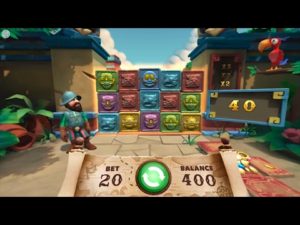 A view from Gonzo’s Quest VR slot by NetEnt.

When will Gonzo’s Quest VR be released?

No official date has been announced for the release of the game, but Eriksson hinted at the launch being sometime towards the end of the year, or at the start of 2018. The game is still being developed but judging by the advanced state of the prototype shown at the ICE conference in London, it does seem likely that we’ll see this game go live around the predicted time.

In an interactive video that was released by NetEnt, some of the features of the upcoming release can be seen. To start off with, you’ll be able to explore your environment in 3 dimensions. This is an obvious one but it’s quite a significant feature when you consider how 2-dimensional slot games have been up until now. Besides creating an atmosphere, the 360-view allows players to access all the game options at once, without having to browse through menus. Just move your head a bit to the left, or right, and you’ll see all the different preferences right there.

In Gonzo’s Quest VR, the idea seems to be that the slot reels form a doorway that you pass through from stage to stage. This is a really cool idea and it will probably be quite fun to “walk through” the slot reels into a bonus stage or something similar.

The 3D element of the game has also been used to make wins more fun. Coins and confetti fall from the sky. Every slot player likes big wins and the experience of being immersed in the game while jackpots rain down upon you will surely be one that will be appreciated.

This is probably just the tip of the iceberg with regards to virtual reality casino games. Think about VR blackjack, poker, roulette and basically any online gambling form that exists already. All of these game types can be adopted to work in a VR format.

So, we’re just going to have to wait until NetEnt releases Gonzo’s Quest VR. Regarding the release date, we’ll of course let you know as soon as we do. In the meantime, at least we can enjoy the original blockbusting slot game Gonzo’s Quest, and the other fantastic NetEnt games. A great online casino for NetEnt games is 888 Casino which not only has a huge variety of games from different brands, but also accepts Canadian players and payment methods.