Esports is growing from strength to strength as more spectators become hooked on the craze, and more companies start team and tournament sponsorships. One of the most popular competitive esports is Counter-Strike: Global Offensive (CS:GO). ESL, the world’s largest and oldest esports league operator, manages the CS:GO league along with another 8 professional esports leagues: Overwatch, Rocket League, Gears of War, Guild Wars 2, Halo 5: Guardians, Hearthstone, Mortal Kombat X, and Tom Clancy’s Rainbow Six Siege. Betway has been involved in the esports phenomenon for a while now, and has recently decided to take things further by becoming a major sponsor of the ESL CS:GO league.

The ESL was founded in 2000 in Cologne, Germany, where it is still based today. The esports company currently holds 11 offices and a number of broadcasting studios at locations around the around. The ESL CS:GO league hosts 14 teams from Europe and North America. The team that wins the tournament walks away with $1m in prize money, not to mention huge opportunities for continuing sponsorship deals.

The ESL CS:GO tournament has an online phase which then progresses into live events. The live matches take place at major spectator venues in front of huge crowds of roaring fans. During the online part of the tournament, games are played 3 times a week – on Tuesdays, Wednesdays and Thursdays. The final of this tournament will take place in Odense, Denmark, from the 8th to the 10th of December. 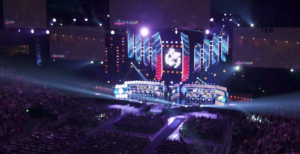 The ESL One tournament in Cologne, Germany.

Earlier this year, Betway sponsored the ESL One Cologne tournament in Germany, along with Acer Computers, Logitech, and PaySafeCard. The event was extremely successful resulting in the SK Gaming team taking first place in front of 15,000 fans at the Lanxess arena. The success of this event acted as a green light for Betway to continue its partnership with ESL.

In recent years, Betway has slowly but surely been adding coverage of esports events to its sportsbook. Esports has been given its very own section on the Betway website, and more betting lines are being offered for esports matches. With the addition of Betway’s very successful sponsorship activities, the company’s profile is being increasingly associated with the esports community.

In July of 2016, Betway was granted membership into the Esports Integrity Coalition (or ESIC). The ESIC is an external watchdog-type organization involved in making sure that esports are kept fair. According to their website, the Esports Integrity Coalition is “a not-for–profit members’ association established in 2015 by key esports stakeholders to deal with issues of common interest – in particular the threat that match manipulation and betting fraud and other integrity challenges pose to esports.”

When asked to comment on the new sponsorship deal, Betway’s Director of Marketing and Operations, Anthony Werkman, said, “We are very excited for the next few months as some of the world’s best CS:GO players will battle it out for its biggest prize, the ESL Pro League, as well as the seven-figure prize pool.”

Werkman added, “Our experience sponsoring ESL One Cologne was a huge success, and the feedback we received from our first-of-its-kind live odds feeds into the broadcast has inspired us to increase our involvement across tournaments and teams in the coming months and years.”

This seems like a very smart bet on the part of Betway. Esports is definitely here to stay and there still seems like there’s a lot of room for growth. Being fans of Betway as a betting platform, we’re happy to see their involvement in the esports community since it also shines a positive light on the better side of online gambling.