After the success of the Jurassic Park slots, Microgaming has released another fast-paced action-packed dino-themed slot: Jurassic World. The Jurassic Park slot was launched as a commemoration of the 20-year anniversary of Steven Spielberg’s blockbuster Jurassic Park. Microgaming’s slot version of the classic action-thriller did just as well thanks to the company’s amazing game designers. In 2015, 22 years later, Jurassic World hit cinemas worldwide and became the fourth highest-grossing movie of all time. Now, Microgaming will be offering fans another chance to be terrified by giant lizards while playing for big cash prizes in the official Jurassic World slot. And to celebrate the release of this blockbuster slot, Jackpot City will be offering new players, including those from Canada, a welcome package worth up to $1,600.

Microgaming announced that the new slot was in the pipeline at the ICE gaming conference in February. Transforming box-office hit movies into slot games is not a new idea, and Microgaming have become experts at it. From Terminator to Bridesmaids, the gaming developer has already more than proven its creative capabilities. Not only do movie slots have to stay true to the original ambience of the story, they also have to work well as slot games, maintaining a high entertainment factor. It’s not enough that the game uses graphics from the movie, slots fans need fun features and opportunities to win big prizes. Microgaming understands this. All their movie slots have excellent playability and lots of thrilling features that keep you on the edge of your seat and let you win more for your successful spins. Now that the much-awaited slot is finally here, players are really excited to give it a spin. The new slot is a collaboration between Microgaming and Universal Brand Development. This means that all the graphics and sound elements are true to the original movie. 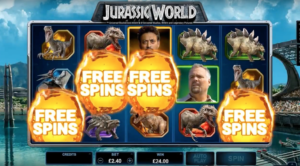 About the New Jurassic World Slot

This new slot has a 5×3 reels layout, offering 243 ways to hit a winning combination. The game is set around the dinosaurs that have been beautifully animated to make you feel like you’re stepping into the park itself. The game has four new features, but if you played the Jurassic Park slot, you’ll be happy to know that this game also has a special 1,000 times multiplier. Instead of the Tyrannosaurus Rex, this time it’s the even bigger and more frightening Indominus Rex that will take over your screen and help you win even more. Other fun features of this game include rolling reels, multiplier trails, free spins, scatters and “Cryo” frozen wilds. The new free spin features are selected randomly for the first fifteen spins, but the great thing is that after that, players can select the free spin feature they prefer. Jurassic World has a payout capacity of 14,000 coins so players can land some serious prize money here.

Jackpot City has announced it will be offering a special $1,600 bonus package to new players to celebrate the launch of this new monster slot. Jackpot City is one the best online casinos for Canadian players because of its high-quality gaming platform, excellent service and range of Canadian-friendly payment methods. Needless to say, this is great news. It’s really simple to take part in this promotion – all you have to do is register to the casino and make a deposit. Unfortunately, this offer is only available to new players, but if you’re an existing player, that means you can click away to Jackpot City right now to play Jurassic World so that’s definitely a good thing too!