It’s no secret that the William Hill online casino is home to great online slots games. The company’s main software provider, Playtech, is a leader in the online casino industry and is known for creating blockbuster games with huge jackpot pools. Playtech casinos will often have more than a few progressive jackpots well over the $1 million mark. This week a lucky slots fan landed a huge payout playing one of our favorite slots – Age of the Gods. The player’s exact location hasn’t been disclosed but we know that he’s 48 years old and lives in Europe. It’s the biggest payout ever made by this game. The exact amount released by the single $1 spin on Age of Gods was $997,690. As a celebratory gesture, William Hill decided to top that up with an extra $3,000 just to make it official that the lucky player was now a millionaire.

The winner explained that Age of the Gods was his favorite slot to begin with and that he’d had a few smaller wins before. “It is my favorite game and I have won some smaller amounts on this game. A couple of $50 and $100 wins. Of course, you dream about winning a million, but until now that was all it was.”

Well, dreams do come true. The Age of the Gods is actually a slots series made up of seven different games in total. The Age of the Gods version that made this particular payout was King of Olympus. It’s only one of Playtech’s 600-plus catalog of games, but it’s gained popularity rapidly to become one of the company’s flagship slots games. According to Shimon Akad, COO at Playtech, “Age of the Gods has been a major success story across all our major licensees since we launched the first game in May last year, and I’m delighted to see a player win the jackpot on William Hill, one of our longest standing licensees and partners.” 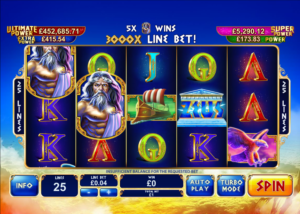 A scene from Age of the Gods: King of Olympus.

The Age of the Gods: King of Olympus slot has 5 reels and 25 lines. The game boasts vibrant yet classic graphics with unique bonuses and features that hardcore slots fans can’t get enough of. The game is linked to one of Playtech’s biggest progressive jackpots so even after it’s been won, it gets back up to those big amounts surprisingly fast. Playtech currently have over 113 progressive games in their jackpot network and last year paid out a mind-blowing €154 million in winnings.

While that number is huge, it’s not that surprising since Playtech’s name does seem to pop up quite frequently in connection with big slots wins. Some recent big wins that come to mind are the ones paid out by Gladiator and the legendary Beach Life slot. Just last year Gladiator paid out $1,637,881 in May and then had another big win in September of $1,284,305. Beach Life, an old-school style slot with sometimes abnormal-size payouts, awarded a player with $2,514,226 in August of last year.

William Hill spokesperson Joe Crilly said,”William Hill has been in the business of creating winners for more than 80 years and it is always incredible when someone wins such a life-changing sum of money from such a small wager.”

If you’re interested in trying your luck at any of these games, along with Playtech’s range of other blockbuster slots like the DC Super Heroes Jackpot games, just head on over to William Hill. It’s an amazing online casino and one of our recommended sites for Canadian players. Besides casino games, William Hill also offers sports betting, poker and arcade-style betting games.