It’s always great to hear about a really big online slot win, but when it happens at a casino you play at almost daily, it’s even better. It was amazing hearing that this recent big win came from Betway Casino, one of our recommended online casinos for players in Canada. This time it was a lucky slots player in the UK who landed a huge payout of £1,448,116.31 playing none other than that legendary online slot game – Mega Moolah.

One of Microgaming’s flagship casino games, Mega Moolah has become one of the world’s most famous online slots games. Its old-school slot style with the added twist of a prize wheel, has always kept players coming back for more. And when you take into account the game’s insane history of big payouts, you realise its popularity is only going to grow.

Reacting to the fantastic win, Anthony Werkman, Marketing and Operations Director at Betway, said, “Almost two years to the day that we were celebrating our ‘World Record’ Mega Moolah winner, another Betway customer has joined the millionaire’s club. We send our warmest congratulations to him!”

Some online casinos have weird payout protocols when it comes to paying out for really big wins. The great thing about Microgaming is that they don’t mess around when the time comes to pay winnings out to their players. This kind of transparency and fairness is always very encouraging to see in the world of online gaming. In a statement to the press, Microgaming made it very clear: “As with all wins on Microgaming’s progressive jackpot network, the winner will receive the prize as a lump sum.” 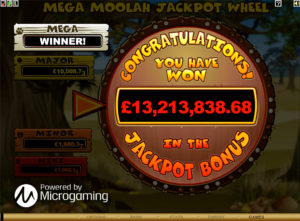 The winning screenshot that led to Microgaming’s Guiness World Record.

Microgaming take a lot of pride in making sure their players know that there’s a real chance at winning big. Roger Raatgever, Microgaming’s CEO, stated, “We have the longest-standing progressive jackpot network, having launched the first internet progressive jackpot in 1998, as well as the biggest, having paid out over half a billion euros to date.”

Betway Casino has an impressive history with the Mega Moolah slot. On October 6th of 2015, a 26-year-old player named Jonathan Heywood won the game’s mega jackpot. During a casual slots session before work, Heywood hit a massive £13,213,838.68. He tried to describe the moment: ”I just kept staring at my screen and seeing this huge number in my Betway account.” By the exchange rate of that day, Heywood’s prize comes to an insane C$26,269,109.90! It was the largest slot win ever and it ended up in Microgaming being awarded a Guinness World Record for the highest sum to ever be paid out by an online slots game.

The crazy thing is that this massive win comes only 6 days after another payout that was also well above the million dollar mark. That win was actually Microgaming’s fifth highest individual payout ever. Because of the nature of progressive slots games, this kind of news creates a snowball effect. People hear about the regular big wins, they play more, the jackpot rises faster, people play more, someone wins, it makes the news, and the cycle goes right back to the beginning. It’s Mega Moolah madness!

David Reynolds, Games Publisher at Microgaming, also commented on the crazy string of big wins, saying, “Two hits and another instant millionaire made by Mega Moolah in less than a week! Congratulations to Betway and their player on this mega win.”

So, what do we do with this information? Is Mega Moolah just going to get crazier and crazier? There must be a huge number of people playing right now so it’s only a matter of time before the jackpot reaches a crazy amount again. Or, can we expect another winner within the next few days? It really is anyone’s guess.