Experienced online slots players are well aware of the existence of the massive progressive jackpot Mega Moolah. A recent Mega Moolah slot win has made headlines once again, awarding a very lucky player with an impressive sum of €6.6 million (around CAD 9.3 million). This safari-themed slot game belongs to the leading software developer Microgaming, a company that we’ve mentioned quite frequently on this site due to its forward-thinking game design and ability to offer big prize amounts.

It’s an experience that as online casino fans we dream about all the time – hitting the spin button; watching the reels come to a stop; and waiting for the prize counter to stop as it grows and grows and grows, eventually coming to a stop on an amount that is almost to big to fit on the screen. 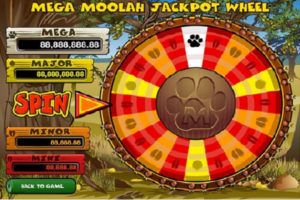 An in-game view of the special jackpot wheel in Mega Moolah.

Progressive slot games are in their own league when it comes to prize amounts. It’s funny that a lot of the most popular online progressive slots are actually fairly basic games. The graphics are vibrant and have a lot of character, but they don’t compare with some of the more modern games being released today. One example that comes to mind is Beach Life which for years has been paying out huge amounts and despite its fairly basic design and features, is as popular as ever.

That’s obviously a big part of what makes these games so popular. It’s almost part of their charm. You don’t really need all the fancy bells and whistles of the 3D animated slot games because here you know you’re playing for amounts that are truly life changing.

That being said, there are still a lot of the more advanced online progressives as well, like those with blockbuster movie themes. Games that come to mind are the progressives offered by Playtech. Their series of Marvel games are amazingly designed games with beautiful animations and lots of features, and they have huge progressive jackpot prizes that are constantly growing due to their popularity. Some examples of Marvel progressives are The Incredible Hulk, Iron Man III, Fantastic Four a many more.

The amazing thing about progressives is that they are linked between online casinos. The jackpot prizes grow as players play the game, regardless of where they are playing from. This particular win went to a player in the UK, but the Mega Moolah prize can be won by any player from anywhere in the world, including Canada of course.

This story has an added bit of crazy to it as well. The lucky player’s lucky spin was made using a promotional offer which awarded him (or her) 80 spins for only €1! The lesson here – make use of those promotions guys!

To play Mega Moolah and other top quality Microgaming slots, just go to one of our recommended Microgaming casinos for Canadians. It’s worth a try, especially when you consider that this massive win isn’t even the biggest paid out by the brand, Actually, there’s a Guiness World Record that was awarded to Mega Moolah for paying out the biggest jackpot. The amount was an impressive £13,209,300 paid out to a Mr. Jon Heywood. The lucky Mr. Heywood landed the win playing at Betway Casino, one of our recommended places for online slots. There seems to be a bit of a competition between the slots developers to break slot payout records. It’s obviously a great way to get publicity and to be honest, who cares? If it means that we get to player for crazy jackpots all the time then bring it on!

Here’s our list of recommended Microgaming casinos for Canadians: