The much-awaited Parq Vancouver casino complex is scheduled to open this Friday. This impressive entertainment facility is one of the largest in the Vancouver region and will be opened by an “official” first roll-of-the-dice at 11pm.

Vancouver’s outdoor lifestyle might not seem like the first place that would come to mind when looking for a casino location in North America, but Scott Menke thinks differently. Menke is the Chief Executive Officer of Paragon, a privately-held company that owns the Hard Rock in Lake Tahoe. He claims that Vancouver wasn’t a second choice or a compromise instead of opening up a casino in Vegas. He explained, “the more time that we spent in the marketplace and saw the diversity and the depth, and learned what Vancouver was all about, I really think that it’s the best location in North America right now.”

Menke sees Vancouver as having the perfect economic climate for this type of venue, stating, “The revenues in Vancouver have grown consistently within the past 10 years; pretty much every other market has not seen a raise in table revenues.” 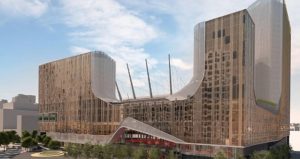 An Artist’s Rendering of Parq Vancouver

The Parq Vancouver is situated in the downtown area of the city, next to the BC Place Stadium. This makes it the only casino in the area, but it’s much more than that. The complex features two high-end hotels which will be managed by the Marriot Hotels group, a luxury spa, sophisticated fitness centre, convention facility, and lots of interesting outdoor areas for the public to enjoy.

And let’s not forget the restaurants. The food served at the Parq Vancouver was conceptualized by Las Vegas-based restaurateurs Elizabeth Blau and Kim Canteenwallaby. The flagship eatery of the resort is “1886”, a celebration of Chinese cuisine. According to Blau, their mission was “to create one of the destination Chinese restaurants in North America. While there are a small handful of fine dining Chinese restaurants, most focus on Cantonese or Shanghai specialties. We want to celebrate lesser known regions, especially in Northern China.”

Generally speaking, the Parq Vancouver seems to have taken a different approach to casino dining, aiming for a more high-end experience. “As an urban resort that is focused on the community, we didn’t feel that a buffet or a food court really made sense,” explained Blau, who opted for a Southeast Asia-styled informal eatery named “Mrkt East” as well as “BC Kitchen” which will focus on popular the flavors of Canada including poutine and burgers, served alongside craft beers and other local spirits.

The casino floor at the Parq Vancouver is situated on the 2nd and 3rd floors and covers 72,000 square feet. The casino offers an impressive 75 table games with all the favorites being covered including blackjack, roulette, baccarat, craps, Sic Bo, and casino poker. There are 600 slot machines to explore with a range of betting sizes from penny-style games to five dollar slots. The casino also offers a luxurious poker room and private gaming rooms which provide full service from dining, private restrooms and VIP hosting.

The facility has a number of features that make it stand out from a lot of casino projects we’ve seen go up in recent years. For example, the architecture has been designed in a way that is meant to let in as much natural light as possible and there seems to be a lot of focus on creating comfortable spaces, not just a “night-life” ambience. Parq Vancouver will no doubt bring in a lot of visitors over the coming weeks and we’ll be interested to see what people say about their experiences there. It definitely looks like a lot of fun!