Playtech have announced another huge collaboration, this time with entertainment giant Warner Bros. The exclusive deal focuses on brands falling under the DC Entertainment license. This means you can expect to see a whole lot of thrilling superhero slot games added to your favorite Playtech casinos, including a new Superman slots series.

Playtech’s CEO, Mor Weizer, commented on the exciting deal stating,” “This is a hugely significant deal for Playtech and we’re delighted to have a wider-reaching exclusive DC film- and TV-branded content licensing agreement with Warner Bros. Consumer Products. We’ve had phenomenal feedback from our licensees based on the high-quality and calibre of the DC-branded games we rolled out in 2016.

“Today’s agreement takes this launch strategy to the next level by allowing Playtech to expand its robust offering with an array of new games branded to blockbuster DC film titles. In addition, these new titles will contribute to the growth of the prize level of the DC Super Heroes Jackpot.

Weizer concluded that “This partnership is a testament to our innovative and forward-looking global casino teams and we’re thrilled to work with Warner Bros. Consumer Products to deliver even more cutting-edge, best-performing DC-branded games.”

Playtech certainly have had a lot of success with their branded slots games, really knocking it out the park in terms of game quality, entertainment value and jackpot sizes. Fans flock to these games, and it seems this new line of superhero slots will continue this winning streak.

The new series of online casino games is set to include a number of blockbuster titles. At centre stage are four slots games based upon the Superman character. There’s Superman – taken from the box-office hit from 1978; Superman 2 – based on the hit release from 1980; Superman, Man of Steel – inspired by the 2013 superhero movie; and lastly, Green Lantern – based on the well-received 2011 movie release. 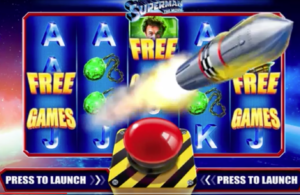 A Scene from the new Superman Slots game.

The contract between Playtech and Warner Bros covers a few years. This means that Playtech have plenty of time to really sink their teeth into a lot of great content. Hard-hitting themes like the ones provided by superhero movies are great for creating online slot games. This is mostly due to the fact that all the action, energy, and vibrancy provided by the characters and stories really helps take a slot game to the next level.

“This collaboration speaks to our commitment to engage with fans in the growing gaming space and continue to offer players an on-going entertainment experience around the world,” Lifford added.

When will the first Superman Slot be Available?

Good question! The Superman I slot game is set for release on the 24th of February 2017. In this first title of the series, players will be fighting alongside Superman against the ill intentions of Lex Luther. This fast-paced slot has 100 paylines and is packed with amazing animation and a great storyline. One of the attractions of this slot will be the special bonus of 10 locked wild spins, with the addition of a boost of win amounts rewarded when Superman turns back time to save the day.

We’ve covered online casinos that hold Playtech’s award-winning games as part of our online casino reviews. We can strongly recommend signing up to William Hill casino, in the knowledge that it’s a great Playtech casino for Canadian players.