The world’s best known online poker room, Pokerstars, have brought on legendary sprinter Usain Bolt to lead the marketing campaign for their newest poker game “Zoom”. Bolt is considered by many to be the greatest sprinter of all time with an impressive 8 Olympic gold medals and world records for 100 and 200 metre sprints that have yet to be broken. Bolt’s special Pokerstars edition offers an intense and fast-paced style of play. This is the first time the brand has integrated a celebrity within the actual platform, but it seems like a sure bet that Bolt’s personality as a respected sports professional will help to promote the Zoom poker game.

“I’m very excited to bring my special edition of ZOOM to my fans and poker players around the globe,” Bolt commented. “It’s a non-stop poker game which is both fun and competitive. I hope everyone enjoys it.”

Director of Marketing at PokerStars, David Carrion, said,”ZOOM is the world’s fastest poker game and is one of the most popular games online as it gives a fast, intense poker experience and that adrenaline rush. Usain Bolt is the ideal fit for this game and having the world’s greatest sprinter on board will bring a whole host of players to the game.” 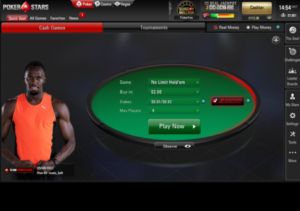 A view of the Pokerstars Zoom Edition with Usain Bolt.

So, how is Zoom different from other online poker games? Well, Zoom is essentially a cash game shoved into high gear. In a Zoom tournament, your opponents change every hand so there’s less waiting and more poker action in a set amount of time. Instead of playing against a fixed table of players for a period of time, you’re up against a pool of players. It’s a very different dynamic.

One of the cool things about Zoom is that you can fold at any point when facing a bet. In fact, you can even fold before it’s your turn to act by clicking the “Fast Fold” button. The Zoom edition will also hold special challenges and promotions such as freerolls, poker puzzles, games and missions to complete, all in the spirit of the legendary sprinter.

If you’ve been following Pokerstars on social media, you’ll be aware of the friendly ego battle between Bolt and popular comedian Kevin Hart. This head-to-head media war will also have its place in the Zoom edition although it’s not clear still exactly how this will play out.

For Pokerstars, it’s a  win-win marketing situation. According to Director of Poker Marketing at PokerStars, Vadim Soloveychik, “Usain and Kevin represent two of the most popular personalities on social media, each with unique characteristics and loyal worldwide fans. It’s the fast vs the funny. The gloves are off and it’s about to go down. There can be only one winner and it will take a smart, shrewd, maverick mind to win this battle.”

After being criticized for a few years of the Pokerstars brand showing perhaps too much love towards pro players, and not taking into consideration the more recreational players, the company has definitely made a change to their approach. Projects like Zoom and others are definitely aimed at getting more casual players on board. Now, it seems that the balance might be going in the opposite direction – is Pokerstars becoming more of a recreational poker playground than a place for serious grinders? It seems that this is always a difficult question to answer for online poker platforms. On the other hand, there is always room for both. It’s just a matter of offering a variety of tournaments and play structures. If players choose the more recreational play styles, then so be it.