We’ve featured William Hill as one of our recommended online casinos for Canadians, and not without good reason. William Hill is an all-round gaming company that has been around for ages. It’s a company that knows what real online casino fans are looking for and has the ability to supply it. Recently, William Hill has been partnering with online gaming software providers to create new content for their members. In a new collaboration deal, the UK-founded company chose Lightning Box Games, an Australian game developer, as the creative source for two new slot games. 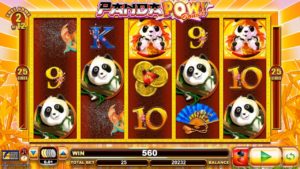 A view of Panda Pow – one of Lightning Box’s most popular slot games.

The fruit of this new collaboration will be two new slot games, exclusive to William Hill’s online casino games catalogue. The games will be roughly based upon two of Lightning Box’s extremely popular slot blockbusters: Silver Lion Deluxe and Panda Pow Deluxe. The similarity to these games will only be the basic structure of the games so these will essentially be completely new games, with some additional features.

To get an idea of the type of slots that Lightning Box produces, try to imagine a 4×5 reel game with 10 lines. Add a touch of cute animal-theme styling, great audio and thrilling gameplay. Top it off with some of William Hill’s big prize money, and there’s your result – a classic yet refreshing slots game that you can’t get enough of.

It’s not surprising that William Hill chose to work with Lightning Box as this Sydney-based company has already made waves with its fair share of waves in the online casino world. This is mostly due to the fact that they’ve been very consistent in their production of vibrant fast-paced slot games that are tons of fun to play and packed with features.

Lightning Box often includes touches of retro 80s gaming favorites in their slots, alongside cutting edge algorithms that make their games so exciting. In fact, this isn’t the first time that major league online casino brands have taken interest in this company. Leading developers such as Aristocrat and IGT have incorporated Lightning Box’s mathematical models into their games.

Some examples of Lightning Box’s blockbuster successes are Dolphin Gold, Red Roo, and Serengeti Lions. The company often centers its games around animal themes, using amazing graphics and animations to bring the reels to life.

Managing director and co-founder of Lightning Box Games, Peter Causley, said: “We have been talking with Andrew for a few years about doing something omni-channel with Hills, and we’re delighted to have finally partnered with one of the industry’s leading bookmakers, to make our UK retail debut.

Silver Lion Deluxe has been tailored with the help of our friends at BetDigital to suit the needs of players within the operator’s LBOs and we’re sure they will enjoy playing the game as much as we did making it.”

Andrew Sackey, William Hill’s Director of Product and Content said: “Omni-channel content that performs strongly in both Retail and Online is a key focus, and Lightning Box Games have been performing in both areas in multiple countries with their free spins-based content, so we are really happy to get their games exclusive in the UK.”

In the UK, the deal means that 2,300 of William Hill’s betting shops will install the new games, resulting in availability in over 9,000 devices. It’s already been proven that Lightning Box’s games are also enjoyed by players in North America so this new deal is also good news for fans of land-based casinos since it includes the production of new slots titles for brick-and-mortar casinos.

We’re really looking forward to seeing new games from this new William Hill-Lightning Box collaboration at our favorite local Canadian casinos. In the meantime, log in to William Hill’s amazing online casino to experience Lightning Box’s excellent slots for yourself.

October 9, 2017 Posted in Casino News, Land based, New Games by nir • No Comments