Evidence has risen pointing to a possible case of money laundering by the River Rock Casino located south of Vancouver. The casino has become a favorite of wealthy Chinese gamblers and a string of large cash bets caught the attention of officials from British Columbia’s Gaming Policy and Enforcement Branch.

A previously confidential government report was released last week that contains evidence of the River Rock casino receiving C$13 million in C$20 bills over the course of just one month in July of 2015.

Commenting on the release of this report, British Columbia Attorney General, David Eby, stated “I received a series of briefings that caused me to believe that our province could do more to combat money laundering at British Columbia casinos. I am making that report public today.” 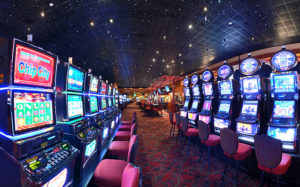 A view of the slots section at River Rock casino.

The company behind the River Rock casino is the Great Canadian Corp., the same operation that was recently awarded management over British Columbia’s expanded gaming program. In response to the recent suspicions, Great Canadian Gaming Corp. stated that it strictly adheres to all regulatory procedures.

The company defended its position amidst the allegations in an official statement: “The British Columbia Lottery Corporation, the Gaming Policy Enforcement Branch and the Financial Transactions and Reporters Analysis Centre have highly detailed and rigorous regulatory obligations that all Great Canadian [Gaming Corporation] facilities in British Columbia adhere to and at all times we govern ourselves to meet or exceed those obligations, rules and standards. We welcome the Minister’s review of the industry and our operations and, along with direction from the Gaming Policy Enforcement Branch and the British Columbia Lottery Corporation, we will adopt any further revisions to the regulatory structure should they direct British Columbia casino operators to do so.”

However, the report that has now been made public was quite clear in highlighting that the initial investigation’s findings show “reasonable grounds to suspect money laundering activity through the use of un-sourced funds has been confirmed. While the patron may be bona fide, the un-sourced cash being accepted by the casino may be associated with criminal activity.”

Staff at the River Rock casino referred to the source of these large bets being “Asian VIPs”; high rollers who are usually visitors to Canada, business people with interests in the Vancouver region and other trade projects between China and Canada.

The report also described suspicious activity in the form of cash being delivered to patrons via late-night transactions either at the casino or near the perimeter of the property.

Is Vancouver Becoming a Hub of Hot Money?

Evidence of an increased amount of laundering activity has come to the attention of officials in BC. The activity isn’t limited to the use of casinos, with the real estate market being a prime arena for suspicious investments and other dubious transactions.

Fintrac is Canada’s anti-money laundering watchdog and has been working alongside local realtors to identify suspicious activity, some of which is pretty easy to spot. For example, when students with almost no income start making big property investments. For example, last year properties in Vancouver’s exclusive Point Grey area totalling C$57 million were purchased by students with little or no reported income.

All this suspicion is definitely not good for the casino industry. Illegal activity adds stress to the system and wastes a lot of time and resources, resources which could be put to good use, strengthening communities and advancing the gaming infrastructure. Also, when this type of illegal activity becomes the norm it can lead to stringent laws that will eventually affect players who are just looking to have fun. Hopefully, this investigation will shed some light on these problem areas so that gambling in Canada can continue to grow in a positive direction.

September 30, 2017 Posted in Casino News, Land based by Albert Tristan Becker • No Comments